facebook twitter whatsapp
This is a 16th century German so-called 'oath skull' on which defendants swore their oath in Vehmic courts. It is engraved with the Roman 'Sator square', a five-line palindrome, rendered in Latin, of five words: SATOR, AREPO, TENET, OPERA, and ROTAS.
Many scholars question the origin and meaning of the Sator square. This was first thought to be of Christian origin because initial examples of the grid dated to around the 3rd to 5th centuries AD. The square also held what were believed to have been hidden Christian symbols.
However, the discovery of what is now the earliest known inscription of the Sator square, on walls in the ruins of Pompeii, dates it to as far back as 79AD. 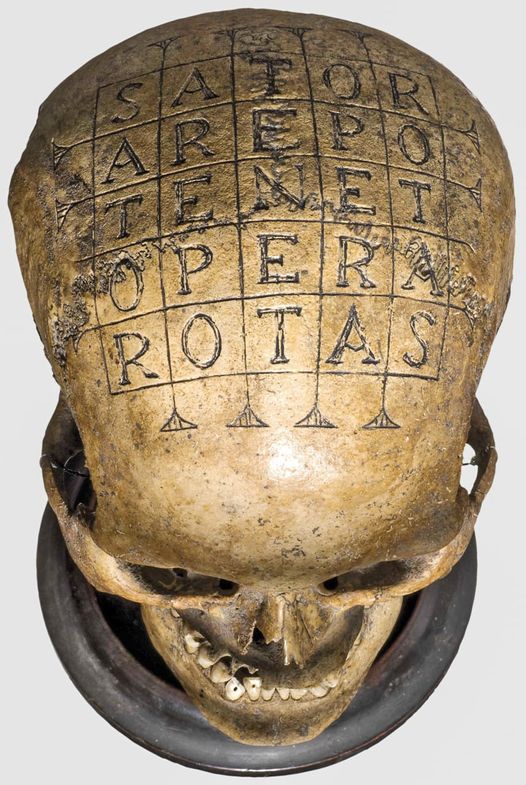 While regional nobles and sovereigns vied for power across Germany, the Vehmic courts alone derived their power exclusively from the emperors of the Holy Roman Empire through the Middle Ages and into the 19th century.

If someone was to be summoned to appear in court, a notice would be nailed to their door or to a nearby tree or landmark. When the accused arrived, they were sworn on a sacred relic - usually a skull similar to the one shown here. Engravings of mystical letters were written on these works. The first pair of "S" stood for Stein and Strick - it meant stone and rope. "G G" meant grass and grein; grass and sadness. An additional "S S", apparently optional (as evidenced by other skulls from this period), could represent the sacrificial sanctum, or sacred offerings.
German Oath skull marking is used in in Europe after the Middle Ages, which cannot be understood much today. The "oath skull" was used to "Oath" the defendants who were brought before the court to give account of their crimes in the Vehmic courts, the name of which we can talk about with great horror in those years in Germany.
has nothing to do with scull simple character utility for loading localities.